Saint Barbara was a Christian martyr who can intercede in our behalf when we need protection. She is one of the Fourteen Holy Helpers, a title given to those who offer particularly effective intercessions to their devotees. Because of this, she should be one of the first saints on your mind when facing a dangerous task such as surgery or handling explosives.

Saint Barbara is also the patron saint of Engineers and Miners. If you work in a mine for example or embarking on the creation of a tunnel, you should pray to St Barbara daily for both safety and inspiration. You might want to pray to her every day even when not working if you are an engineer.

Who is St. Barbara and why should we pray to her?

Saint Barbara is believed to have lived in the 3rd century AD in the eastern Mediterranean, probably in modern Turkey or Lebanon. The daughter of a wealthy man who locked her in a tower, confined to the tower she converted to Christianity.

Her father become angry of her conversion to Christianity and had her tortured and arrested (as was unfortunately the fate of many who convert to Christianity). Every day, she would refuse to renounce her faith. Every night, her wounds would heal.

Realising the futility of having her renouncing her faith, her father had her sentenced to death by beheading.

Her father himself was to carry out the beheading!….

After beheading St Barbara her father was struck by lightning! -Divine retribution for his horrific act.

Not surprisingly, St. Barbara is also the patron saint of lightning strikes.

She is a strong protector saint! She was protected from torture and her wounds were healed, and so we ask her to intercede on our behalf for protection.

Saint Barbara, your courage is much stronger than the forces of hurricanes and the power of lightening.

Be always by our side so that we, like you, may face all storms, wars, trials and tribulations with the same fortitude with which you faced yours.

O Beautiful Maiden once imprisoned in a high tower, protect us from the lightning and fire that rages in the sky and the discord of war.

Keep us alert and protect us from the dangers that surround us.

Holy Mary Mother of Jesus intercessor for us all; we pray to assure receiving of the Sacraments of Penance and Holy Eucharist at the hour of our death.

Through Jesus Christ Our Lord, Amen.

Father in heaven who among the other miracles of your power, have given to men and women of holy faith the victory of martyrdom, grant, we beseech you, that we who are celebrating the birthday to life eternal of Saint Barbara, your virgin and Martyr, may through her intercession one day revive the reward of eternal life in your heavenly kingdom.

Praying to the saints is one of the best ways to “overwhelm the gates of heaven”.

If you are looking for protection, or embarking on some engineering feat, pray to St Barbara for blessings and let us know in the comments how you received her mighty grace! 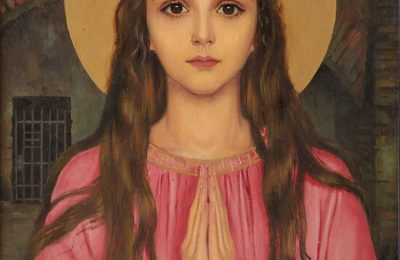